The Queens County Republican Patriots candidates for public and party offices were joined by NYC Republican mayoral candidate, Curtis Sliwa, at Queens Borough Hall on Sunday May 16 to announce the stunning 4-0 ruling in NY State Appellate Court 2nd Department. This decision reversed the New York City Board of Elections and lower court rulings the week before, throwing the candidates off the ballot for an “inconsequential” technicality. Eighteen Republican candidates are now ordered to be restored to the ballot, and Republican voters of Queens get a chance to hold a Republican primary and select the candidates of their choice. 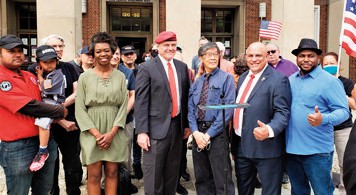 “Notwithstanding that decision, the establishment Queens County Republican Party organization is seeking to drag this soap opera out and see if they can get the New York State Court of Appeals to grant them a hearing. While we think this is highly unlikely, we think the four-judge panel’s 4-0 decision speaks volumes on our behalf and that this coming Tuesday, the establishment organization will be rebuffed once again,” Republican Patriots leadership said.

Republican Patriots leader, Joe Concannon, spoke on behalf of the diverse group of assembled candidates, applauding them as “…hard-working American citizens who have the wonderful right and privilege to vote here in America and Queens County, and we will fight for every one of them to have their day, whether it’s to run for State Committee, County Committee, City Council or Mayor of NYC.” He continued, “All they wanted from the very beginning was their opportunity for a primary. They wanted all of you to have the opportunity to vote for the best candidate out there. And that’s why we are here today, because we are going to fight that into the highest court in NYS, the NYS Court of Appeals.”

Concannon discussed the right and privilege for a Republican in Queens County to run for public or party office, saying, “They should be unimpeded by a bureaucracy that seems to be hellbent to never support anybody other than the incumbent.”

To the tune of occasional chants of “throw them out” he went on to say, “We will not be told by the establishment here in Queens County, these people who behave like juveniles from some sort of preschool, that we cannot be on the ballot. They need to grow up or they need time out in the corner to think about what they’re doing to our party, our county, or city and state. They are manipulating the system with their cohorts at the NYC Board of Elections who should be thrown out.”

Concannon concluded his remarks about the establishment GOP, saying “It’s time for a change… and your juvenile theatrics and all your little manipulations of the Board of Elections, their lawyers, their commissioners, and everyone else, your day is done. It’s over. We’re coming after you…until you are out of this party.”

Concannon then introduced Curtis Sliwa, a candidate running for mayor, as the man for the working men and women of NYC.

Sliwa declared, “People should have an opportunity to run for office at the lowest levels to the highest levels and there should not be all these impediments.”

Sliwa also commented about the sacking of Republican mayoral candidate Sara Tirschwell, comptroller candidate John Tabacco and “so many candidates at the hands of the Haggerty brothers and their minions.” In the case of Tabacco, Sliwa recounted that one small, misplaced number on a cover sheet was the reason 17,000 signatures and his candidacy were tossed out.

Sliwa said “something has to be done” about the ability of the Republican Patriots to run unimpeded against the county candidates, since they’ve been put through delays and endless court proceedings, and had to raise so much money to defend themselves. He urged, “If you don’t have deep pockets, or you do, you’ve got to contribute to their legal defense fund, because they’ve had to dig deep into their personal resources to fight the good fight. I’m hoping that they and I are able to win this primary on June 22nd and send a message to the Queens Republican County machine. But more importantly, it will open up the process for everyone else who wants to make a difference.”

Sliwa ended his remarks commenting on the time they removed his good friend former Congressman Bob Turner, ousting him from the chairmanship of the Queens GOP and taking over the party, saying, “I will never forgive, I will never forget and I will use the power of the mayoralty to try to find out what kind of indiscretions have been going on. The same way I want Thrive investigated, de Blasio and his wife, we’re going to be investigating the Queens County Republican Party.”