Are Free and Fair Elections Possible?

Are Free and Fair Elections Possible?

The corruption at 42 Broadway 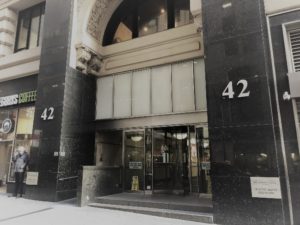 What follows is detailed and factual account of crucial importance to all Americans regardless of political party affiliation, in understanding local, regional, and national elections and what has been corrupting our political election process.

Today, political candidates are blocked from even appearing on the ballot due to the nefarious machinations of political insiders.

This is not a Republican issue or a Democrat issue, but an American issue involving all political parties. It is about democratic participation in our political system.  It is how potential candidates do not even reach the ballot box and are thwarted by entrenched political insiders in collusion with Board of Elections executives. Thus, the status quo is maintained.  It is the undermining of the foundation of the democratic voting process that we the voters trust, which has been usurped by ten political “commissars” in a room.

The nefarious drama took place, as it always does, at 42 Broadway in Manhattan, in the bleak hearing room of the Board of Elections. In this room, the 31 Republican candidates knew their fate was already determined.  This is the factual account of 31 Republican candidates, running for public and party offices in Queens, who were recently thrown off the ballot for meaningless technicalities, thereby denying 130,000 registered Republican voters in Queens County, NY a choice in the upcoming June 22nd Primary Election.

A former commissioner revealed some of the shocking details of the insider protection racket at the top tiers of the Board of Elections and party organizations. According to the former insider, the commissioners, general counsel, the party bosses all collaborate to pre-determine the approved candidates to get on the ballot and who they want to knock off. These private “horse-trading” sessions occur prior to the public commissioners hearings, which are carefully pre-scripted to make sure the insurgent candidates do not have ballot access in their party’s Primary Election.

This is how the story played out. It began with 31 candidates seeking public and party offices under the Republican Party banner in Queens, but outside the auspices of the County Republican Party organization. The Queens County Republican Patriots (QCRP), a NYS multi-candidate political committee, supported their desire for public service with petitioning and other activities to meet the legal requirements to get on the ballot. Most of the candidates and their teams gathered several times the number of signatures required.

The County Republican Party sought to prevent the 31 candidates from getting on the ballot by filing General Objections against their petitions at the Board of Elections. Specifically, the county party charged that all the petitions should be invalidated, because of a listing of pre-printed Election District (ED) numbers in the blank space on the petition. The listing of ED numbers was not prohibited by NYS Election Law.  Actually, placing the ED numbers on the petition does clarify which signers can legitimately sign the petition.

The county party also filed a lawsuit in Queens Supreme Court against the 31 candidates. It was an “Order to Show Cause” to invalidate the petitions and disqualify the candidates from appearing on the ballot. All candidates were served with lawsuits to appear in court taped to their doors late at night.

The commissioners hearing took place on April 14th at the Board of Elections. The Republican Patriots argued to the commissioners that the numbers on the face of the petition were valid and legitimate according to Election Law. The county party argued that the petitions are invalid, and thus the legitimate petition signatures of 3000 registered Queens Republicans were null and void. There was a brief give and take, interrupted abruptly by the Queens Republican Commissioner who accused representatives of the Republican Patriots of intentional deceit and recommended that they “move the clerks report” which they did. All commissioners summarily voted in unison with a 10 to 0 decision to declare the petitions invalid for incorrect markings. All 31 candidates were “removed prima facie because of invalidity of petitions.” You can see this segment of the hearing, which is on the BOE website for public viewing, at: https://vote.nyc/page/commissioners-meetings    April 14, 2021, at 5:08:00.

Most people are unaware of the political process, but it’s vital to understand this well-guarded establishment secret, since it plays a major role in our destiny as a community, city, and a nation. We need to understand the process in order to fulfill our civic duties as citizens, and to restore honesty and integrity to our political system. This is a story of voter suppression that needs to be reported and understood.

The Republican Patriots hired the law firm of Harris Beach PLLC, to file a Petition to Validate, to reverse the flawed determination at the commissioners hearing and restore 18 of the original Republican Patriots candidates to the ballot. Harris Beach filed the lawsuit against the Board of Elections in Queens Supreme Court and the hearing in the Election Part was set for last Wednesday, April 21. After many roadblocks to prevent a hearing on the merits of the case, and a couple of adjournments, the Judge hasn’t as yet rendered a decision.  At the present time of this writing, the county party’s attorney postponed the Petition to Invalidate until after the Judge’s decision. Thus, with the adjournments and requisite appeals, the legal battle continues indefinitely.

The Republican Patriots are determined to keep fighting in the courts to restore their candidates to the ballot, so that the merits of the case are heard.  The system itself is not at fault.  The process for candidates to get on the ballot was designed to reduce fraud, forged and duplicate signatures, in order to ensure honest elections. But it has been corrupted by malevolent people to hold on to power. They have perverted the system so that any scratch or marking can be a fatal defect, invalidating the entire petition, to knock outsiders off the ballot. There must be changes in the system to stop the present corruption.

The integrity of our local elections must be safeguarded. We are writing this so that people are aware of the problem and learn more about our system of democracy and freely participate in it. This issue is about our most urgent civic duty, the right to vote.  People fought and died to preserve our system of voting and free and fair elections.

More people need to run for office, not less. The political process should be set up to advance the best candidates to be on the ballot. The voters should decide who runs for party and political positions, not ten bureaucrats in a closed room.  The rank-and-file Republicans, Democrats, Conservatives, and Democratic Socialists of America must be free to express their views in the open marketplace of ideas and policies in America. In the greatest and freest country in the world, let the people choose who will represent their best interests.  Stop the party insiders from abolishing the primary. Let the candidates run.  Let the people choose!

Phil Orenstein is the president of the Queens Village Republican Club. Established in 1875, it is America’s oldest Republican Club  www.QVGOP.org. Historian, Jerry Matacotta, founder of History Seminar Series at Queensborough Community College and High School American History teacher, was the advisor for this article.